Throughout Jeremy Burnside’s career, he had always noticed and appreciated the determination and resilience of many of his injured clients and their families. In 2012, Jeremy met Kody Kennard, a local MMA champion fighter who lost the use of his legs from a motorcycle accident. After being inspired by Kody’s love of life and his ability to persevere when a lot of people may have quit, Jeremy created his law firm’s first courage award, named after Kody.

Burnside Law has went through several growth spurts that interrupted the presentation of the awards, but was able to make two special presentations to two special individuals, Rusty Gordon and Nikki Velazquez at the 2017 Chili Cook-off. 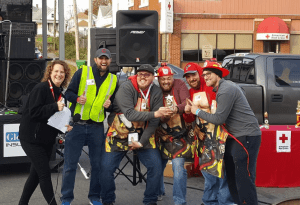 Rusty Gordon suffered serious injuries as a result of a fall at work caused by a negligent driver. While his health got worse, Rusty kept his faith. Two years after the accident that changed his life, he had already begun his physical and mental comeback. As of the date of this publication, Burnside Law is proud to report that Rusty recently had a very successful surgery that has given him great strength and we can only assume was a testament to his faith in himself.

Nikki Velazquez is a local mom who was also in a bad accident where she lost her favorite dog, Paco, in addition to sustaining very serious injuries. She endured months of recovery like Rusty, always keeping her faith. Nikki regained much of what she had lost in her accident and is a hero for her determination to get better for her family.

Both Rusty and Nikki also had the tremendous support of their brave and patient spouses, Deanna and Benito, who also deserve great recognition.

Burnside Law was proud to have represented these families and prouder to have resolved those terrible chapters in their lives. Jeremy Burnside is proudest of being able to call them good friends.

The next Burnside Law Kody Kennard Courage Award will be presented at the September 2018 Chili Cook-off.