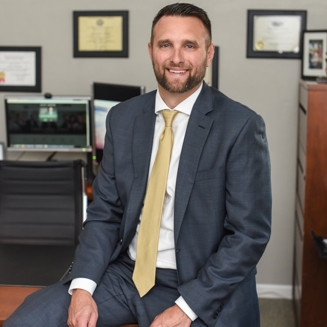 Your Tri-State (OH | WV | KY) personal injury and wrongful death attorney, and founder of Burnside Law, Jeremy M. Burnside, uses his big city trial experience to assist his Appalachian clients with a fresh approach on what has become a tough area of law in our region. Jeremy dedicates his time outside of the courtroom to developing strategies to maximize his firm’s commitment to the resolution of cases in the quickest way possible, without sacrificing value and compassion.

Jeremy has had to work for everything he has and was given nothing but the life lessons from his family. Jeremy’s paternal family came from Clay County, West Virginia, and Pike/Letcher County, Kentucky. His grandparents, like many Appalachian Americans, met in Cleveland, Ohio, after the coal mines shut down and factories closed. Jeremy was born and raised in Cleveland, Ohio, but never forgot his Appalachian roots.

Jeremy grew up on the near-west side of Cleveland and continues to maintain strong connections with Brooklyn, Old Brooklyn, Brookpark, Parma, and Parma Heights. He attended the University of Charleston in West Virginia, where he served as Student Body President, Editor of the school’s yearbook, and Captain of the rowing team.

As an undergrad, he was named All American Scholar and received the US Army ROTC National Sojourner’s Award in 1998 and the title, International Man of the Year (“Top Teke”) from Tau Kappa Epsilon. As a leader of these various organizations, Mr. Burnside helped each organization achieve success.

After his graduation in 2000, Jeremy went on to attend law school at the Appalachian School of Law. There, he won the Virginia Trial Lawyers’ Trial Advocacy Award in 2004 and was named to the Dean’s List. After the tragic murders of Appalachian School of Law victims in 2002, Attorney Burnside founded the ASL Memorial 5k race, which has now provided benefits for first-year law students for over a decade.

In this setting, Attorney Burnside combines his experience as a big-city attorney with his small-town compassion, bringing both strength and passion to each and every case. With this as the backbone of the firm, Burnside Law has grown and aims to become the most trusted personal injury firm in the Tri-State.

Attorney Burnside’s extensive experience encompasses everything from automobile accidents to wrongful death to aggravated murder. He is passionate about always honing his jury trial skills, which is why Burnside Law has an in-office mock courtroom.​​​​​​

In addition to his legal experience, Attorney Burnside is a published author. His book, Look to Your Left: A True Story of Law School Survival in the Face of Impossibility, Murder, and an Appalachian Apocalypse has been compared to John Osborn’s Paper Chase and Scott Turow’s One L. The book is available for purchase, All proceeds benefit the Appalachian School of Law Sutin Blackwell Dales Memorial Scholarship fund.

Attorney Burnside is married to Maddie Burnside, a local real estate broker. Together, they have two beautiful daughters. In his free time, Attorney Burnside enjoys writing, running, and rowing and is a proud parishioner of St. Mary’s Catholic Church.

If you need a personal injury attorney in West Virgina, Ohio, or Kentucky, call us at (888) 724-9319 for a free, confidential consultation today.