Our first Burnside Law Chili Cookoff took place on a cold, but exciting, November 11, 2017 day. During this special Veteran’s Day, eight local community teams competed for multiple awards in professional and amateur divisions, and worked hard to turn out some awesome submissions into the competition despite the temperatures outside! We invited all our clients, past and present, to come down to our Portsmouth office and enjoy free admission to the event. Cinnamon Wellington, owner of The Happy Pot, generously provided a painting and craft station for kids to create ornaments and canvases, when they weren’t having their faces painted by our local Dancing With Our Stars contestants or jumping on the bounce house supplied by Party Pros. Becky Sosby, owner of The Party Connection, supplied the VIP Beer Garden and space heaters for VIP ticket-holders to warm up under, while the Bonneyfiddle Project’s Robert Black supplied the stage and equipment for live music throughout the day. Attendants and volunteers enjoyed toe-tapping performances by Deacon Ron, EK Station, Micah Kesselring, and Second Chance Band. We were fortunate to have Drew Applegate, vice-principal at Portsmouth High School and US Army veteran, give a moving Veterans’ Day address midway through the event honoring our nation’s brave men and women in uniform. 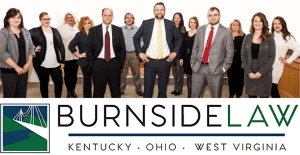 In the end, Cara Crisp and her team from Compass Health brought home the first-place amateur division victory, while second place was won by Tanner Hatcher and his team The Fire House Gang, and third place was won by Robert Black and his Boneyfiddle Project team. In the professional division, What The Fork? AKA Fork and Finger, led by Brad Greene, carried home the first-place victory. Honorable mentions included The Firehouse Gang for best decorated booth, team spirit, and fundraising, and Compass Health for people’s choice award and best service. “Where’s the Fire Extinguisher” award for the hottest entry went to TSHD, led by Kirk Donges.

We had a lot of help from the community, including local Red Cross volunteers and Dancing With Our Stars contestants, but the event would not have been possible without our amazing Portsmouth staff who worked hard to make it such a success.

Burnside Law donated all of the profits from the event to the Ohio River Valley Chapter of the Red Cross and the Bonneyfiddle Project, respectively.

We look forward to 2018’s second annual chili cookoff, and anticipate an even larger turnout that last year’s attendance. WE HOPE TO SEE YOU THERE!